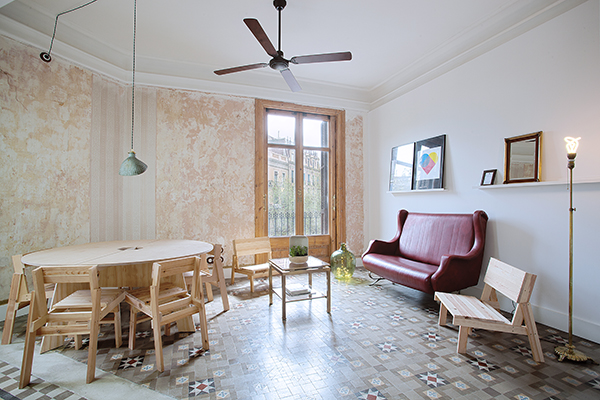 Looking back: our Casas by photographer Carme Masià

When Mari and Petz found the space that is now yök Casa + Cultura in 2013, it was pretty much as it had been built in the year 1900, although covered in a think layer of history and dust. The different textures and faded colours, as well as the light peeping in through broken blinds, gave the spaces a unique atmosphere. A somewhat romantic and a little nostalgic feeling lingered around the rooms, accessible through too many wooden white doors. At the same time, it was very inspiring and offered many possibilities to create some wonderful new spaces. It was clear that some of this had to make way to more enjoyable, brighter and especially cleaner rooms. Luckily for us, photogapher Carme Masià paid us a visit and managed to capture the past before we started with the eco-renovation in 2014.

Carme, born in Girona, has called Barcelona her home since 1989, after five years in New York as an artist in residence. She does her own work, and also specialises in interiors and products for local design companies like Santa & Cole or Teixidors (two local design companies we really like). The photo below hangs in Casa A because it shows the space before it was turned into the 2 bedrooms. We particularly like the “phantom” on the wall; the shadow of a previous mirror or picture frame that hung in between the two sliding balcony doors.

The photo at the top features the chimney in the main dining room. This space had to be divided up to make room for two new living rooms. The left part of the space, including the chimney, can be found in Casa C, whereas the right side is now part of the kitchen/living room of Casa A. We did not dare to move the marble piece for fear it would break, and therefore simply built the wall on top of it. The side of the chimney is therefore embedded in the wall and can be seen next to the kitchen of Casa A, and the chimney stays safe and sound where it has been since 1900:

Last but not least we leave you with two portraits: one of Carme Masià herself when she came to document the spaces, and another one by her of Petz and Mari. If you like Carme’s work, please contact her directly: masia.martorell@gmail.com. Carme is one of the rare creatives who enjoys life without a web site or social network!

Please also view Pedro Azevedo Dias’s video story of our space before and after eco-renovating.

This website uses cookies to improve your experience. If you keep browsing or press "accept" we'll assume you're ok with it.
Accept Read More
Manage consent

This website uses cookies to improve your experience while you navigate through the website. Out of these, the cookies that are categorized as necessary are stored on your browser as they are essential for the working of basic functionalities of the website. We also use third-party cookies that help us analyze and understand how you use this website. These cookies will be stored in your browser only with your consent. You also have the option to opt-out of these cookies. But opting out of some of these cookies may affect your browsing experience.
Necessary Always Enabled
Necessary cookies are absolutely essential for the website to function properly. This category only includes cookies that ensures basic functionalities and security features of the website. These cookies do not store any personal information.
Non-necessary
Any cookies that may not be particularly necessary for the website to function and is used specifically to collect user personal data via analytics, ads, other embedded contents are termed as non-necessary cookies. It is mandatory to procure user consent prior to running these cookies on your website.
SAVE & ACCEPT